Wanderings, mysteries and taste for danger

In Kaode, before leaving for the Known World, a traveler chooses his archetype among five propositions

Each archetype confers a certains capacity right from the beginning and represent different traveling philosophies, different ways to play the game.

On level 15, then 25, the player is asked to choose a direction, a branch in his archetypal tree.
Through these choices, the traveler will grow and specialize himself. He will gain two new abilities during his adventure. (Beware though, some choices can hinder others).

Today, we present you in exclusivity an archetype we particularly like: the Adventurer!

Description: Curious by nature and fond of great spaces, the adventurer wishes to meet unexpected characters, to find himself in beautiful and terrible situation. To sum up, he wants to be the hero of the stories he used to read, and absorb the world in his memories.

As you can read, the adventurer is thus a proactive character, wishing for a life full of twists, not afraid to face some obstacles!

Let’s see what choices you have at level 15.

Name: Story hunter, investigator of what is rare, strange and mysterious

Questioning merchants and playful children, wandering the streets for pleasure, this adventurer is always looking for new stories, legends and rumors about places, people or his surroundings.
Consequently, he spends most of his time solving puzzles, revealing the secrets of the places he visits. So much that people tend to whisper that mystery is his only lover.

- When this type of adventurer finds himself in some place, the actions and options he hasn’t explored yet are being put forward.
- Also, this traveler gains more experience.

Being used to travelling great distances easily, this adventurer therefore greatly enjoys crossing - even greater - landscapes and terrritories. Always on the move, he is constantly on the field, taking part in every expeditions, every conversations and every stories told by strollers during his adventure.

- This traveler is now 8% faster when travelling the lands of the Known World.
- He has the ability to search a field more often when looking for objects to trade. And he’ll have 2% more chances to make a random encounter than a common traveler.

Going away and living in the fast lane, or following things through.
What adventurer will you be?

Of course, if you take a close look at an adventurer, you’ll discover that it is possible to choose both possibilities. But first, let’s see what level twenty-five is likely to bring to your traveler.

In this world where survival is first, and preferring loneliness to crowded places, this adventurer has made dark places his natural habitat, making it difficult for other to catch him of guards or to even approach him, whatever their intention may be.

- This traveler is able to rest wherever outside the Known World, even in place it usually isn’t allowed.
- The adventurer and his creatures now inflict 5% more impact damage, whereas his opponents see their energy spending increase by 5%.
- He has 5% more chances than his opponent to launch the first attack.
- At last: prices in stores are 7% more expensive for him.

This adventurer has crossed, fought and survived the worst, darkest and most threatening situations there can be in the Known World.

Wearing each of his scars as a memo, considering each painful memories as a lesson, he is now a #%@*£ survivor! And the next extreme situation will be there to prove it.

- When this traveler personally takes part in a fight against an opponent whose difficulty level is “immoral”, he receives a 50% bonus on resistance to damages, -20% impact damages received and he inflicts 25% more damages until his next defeat.

Hiding or getting tough: will the adventurer’s future be to withdraw?
It’s up to you Traveler!

This focus on of Kaode’s archetype is coming to an end, we hope you’ve learned as much about the game as about your own desires!

Let us remind you that all the level 1 archetypes will be developped by the release of Kaode, but you’ll have to be a little more patient concerning the development of the rest of the trees.

I know I know. But hey, have you heard of our « Évolution » page? Rumours has it will be one of the first mechanical proposition...

Talk to you soon, thanks for following us! 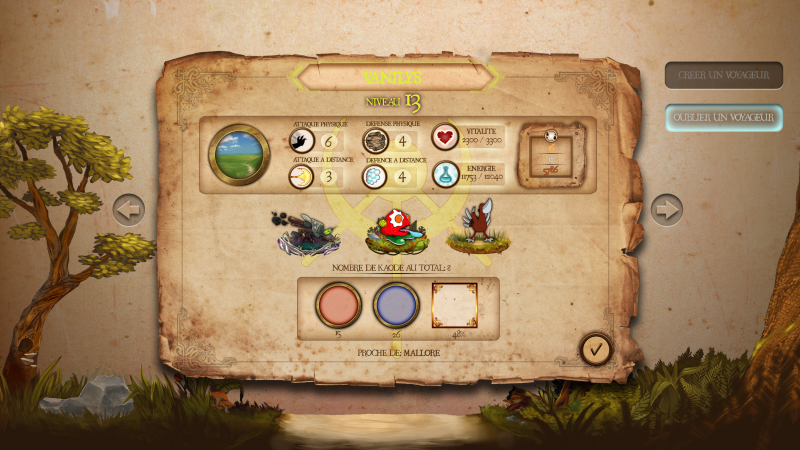