In the first part of this section dedicated to the study of Mechamosquito, we are going to reveal all the functions of the Kaodian library, where to find informations and the quality of these latters.


Come on, it’s time to open your Kaodian Library and take a look at all this. 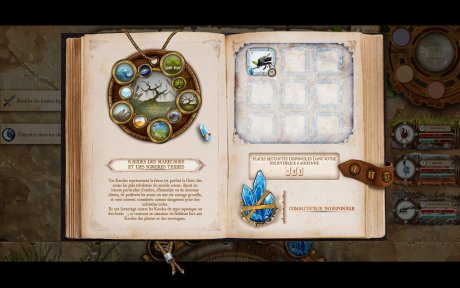 Once you’ve selected the swamp field-type, everything is so much clearer! 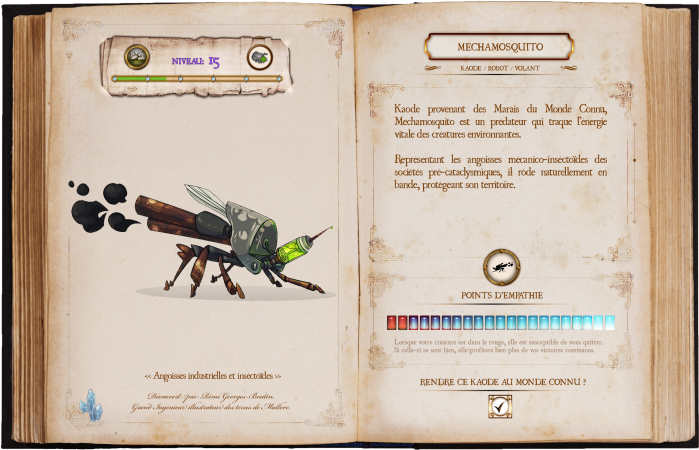 One click on Mechamosquito and here appears its presentation file.
Let’s start reading it together, from the top left corner.

**-** Mechamosquito is here of level 15, it comes from the Swamps of the Known World and is likely to evolve.

The dot on the right side of the level indeed indicates that Mechamosquito is able to change and it also informs you how it can be done.

Here, the rarity level is “Rare”, which one can recognize thanks to the dot: “Evolution by visited places”.
_(To see other ways for Kaode to evolve, take a look at “the Battle Lexicon”!)_

Further down, under the illustration, in quotation marks, you can see the idea the Kaode represents, as well as its creator’s name.
(Just click and the artist’s work will appear under a new tab!)

The crystal informs you that the creature is held in the traveler’s Kaodian crystal.

On the right, you’ll find the creature’s name, the subtype and its current number of empathy points, with its maximum.

- As a reminder, a Kaode’s subtype lends it some immunities and involves some restrictions concerning the targeting of allied or enemy abilities.

- The last part enables you to put an end to your cooperation (definitively) with the creature. 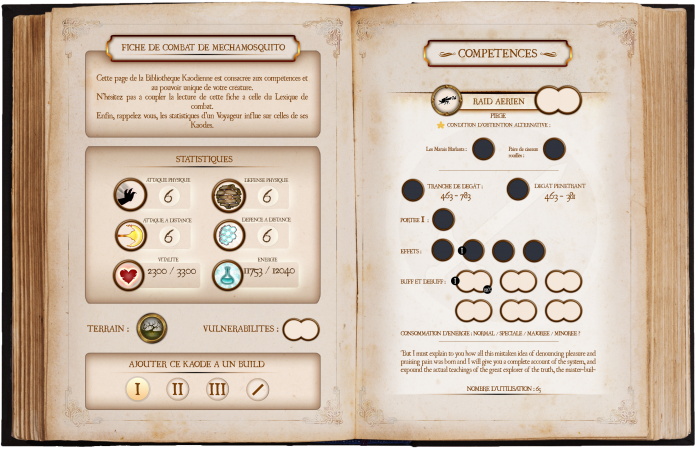 In just one other click, here you are on Mechamosquito’s battle file!

The Kaodian library has its own «Battle Lexicon» which you can access through one of the bookmarks (not visible here). While waiting, don’t hesitate to take a look at the one available on the website.


Further down, the creature’s field type is reminded. It appears that Mechamosquito will receive a 7% bonus in attack and defense when it will fight in the swamps of the Known World.


On the right of the same page, you can see the creature’s two vulnerabilities: attacks from “Mountain” and “Plain” field type.
The damages after such attacks will be 15% more serious against this Kaode: beware who you’re facing and where it comes from!
To prevent that, check the base under the creatures fighting, they inform you about allied and enemy creature’s field types.


To finish, the last section allows you to add (or withdraw) a Kaode from a particular build, if this latter has a spot left for it.
Here, Mechamosquito is already part of the build 1 and will thus be automatically transferred to your Kaodian crystal when you’ll click on the small “I” which you can see on the belt of the Kaodian library’s main page (beware: a “commutator” has to be available).
This allows you to build specialized teams in advance, according to different environments or opponents, as well as to load them easily if needed.


Here ends the first part about how to read the Kaodian library as well as the file dedicated to Mechamosquito.
(The next part? Already online!)

Thank you for reading, see you soon!