A game is bound to change in 4 years!
Here’s a little treat for your eyes: the interfaces and images of the game. Enjoy, you’ll soon won’t have any reason left to laugh!

And here’s the first version of the main interface of Kaode!

The goggles allowed you to meet your friends on the Chat, the newspaper obviously leads you to the Noquiem Gazette, the pocket watch gave access to your Kaodian library; the cards lead to your character's sheets, your weapons and achievements, and to finish : the crystal was supposed to represent your Kaodian crystal.

We were looking to create something immersive by putting some kind of “dashboard” for the players. It turns out it is actually best to have something more ergonomic and integrated. But we’ll let you judge on this.

You’ll notice - you amateurs - that we integrated many references to games such as “Commandos”, “Fallout” 1 and 2, “Arcanum”, many “point & click” and so on. 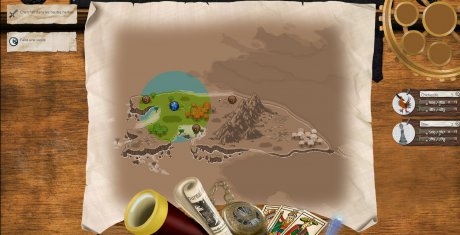 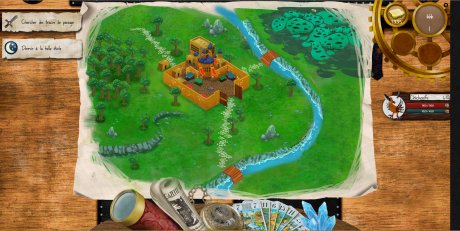 Kaode’s main interface, the heart of the game.
We’re sure glad Léa’s working with us!

You’ll notice the cog containing all the information about the character as well as about the Kaodes in your Kaodian crystal, which you can see on the left of your screen, along with their field-type.
On the left, you’ll find the parchment for generic actions on the map and/or from consumable objects. In the center are the main controls already detailed.

Right from the start we already had a general idea of how the main screen should look like. For gameplay reasons and after many tests, it was clear that some practical information for the player were missing.
Our designer quickly changed the background and the elements, which were at first mainly found on free stock images websites.

All along the project, we often defined our needs in terms of design and looked for something that would fit until we found something better. This process of “waiting for something better” allowed us to still go on with our project against all odds. The people taking a look at Kaodes were indeed outraged or mocking our design “under construction”, and many people came to us, willing to lend a hand in order to improve it, some of whom are now part of our current team.

The communication about a game and its credibility are mainly based on its design. Even for a game like ours, and even if people say they understand it is still a “prototype under development”, the design is still like a metaphorical candy for the player’s or editor’s mind.
However, and we realised this past few years, having no designer(s) does not necessarily hinder the development, the gameplay setting and all the rest : temporary and approximative images are always better than none.

At last but not least, if the image is the mind’s candy, animations are its hero.
After studying a few mobile game while developing Kaodes, we realised how much people loved to click on small bubbles, experience points or when little coins appearing on the screen.
The next version of Kaode will thus contain some of these elements, in a more clever than “freemium” way (yuck!). 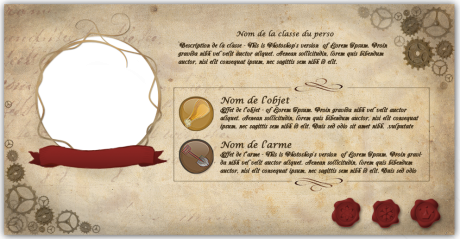 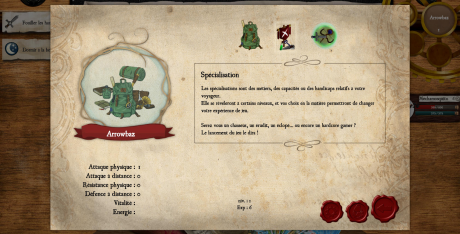 A first version of the character’s file, which is supposed to summarize the archetypal class, the object and the active weapon. 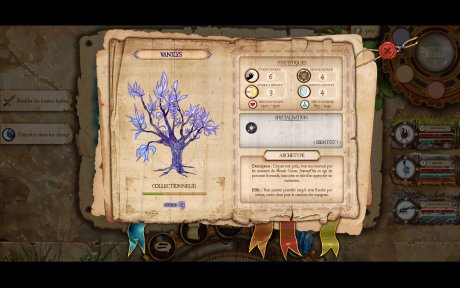 Our intention was to offer an overview, always in line with our graphic charter based on organic matter, designed like a “story on paper”. The wax seals allowed the player to change pages.

We soon found interesting to limitate the player with only one usable weapon and one usable object at a time. In Kaode, it is essential for the player to be able to make choices and define his game style. This thematic can be found in the open study of the game about whether it is necessary or not to have a main quest in a game of adventure and exploration, and/or in a game of collection and creature fight. 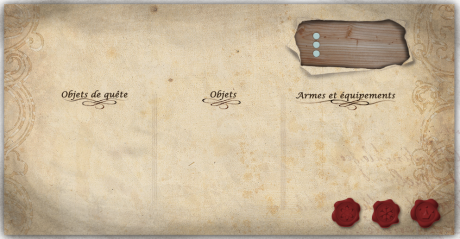 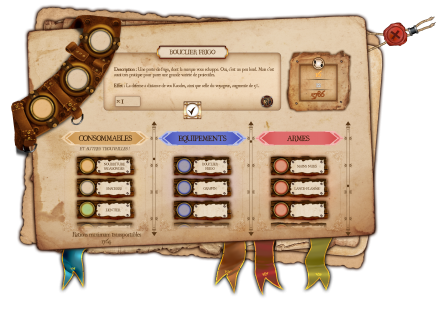 *Sketch of the object file.
The spot on the head right corn used to host the different trading object sorted through colours according to their values.

Indeed, you can’t imagine how many rubble and tinker - unusable today - one can now exploit and trade in a post-apocalyptic world. Their values is set according to people’s needs and has therefore no fixed price.

Nowadays, there are five categories of objects sorted out in this board.
Findings are “useless” or quest objects; the rations are essential during a journey; consumables have use during battle or can offer action parchments on the map; equipments have a constant use, but a specific one as well and can affect all or part of the game; weapons give your traveler certain skills whenever he has to take part himself to a fight.
There’s lots of them. Really a lot. 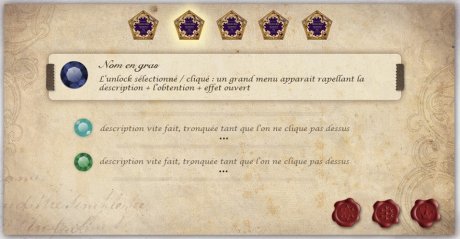 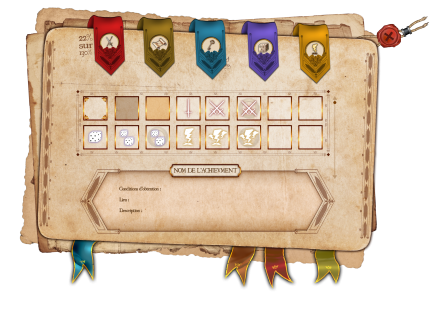 Seeing the diversity of action and direction that could be chosen in Kaode, it seems logical for us to reward our player’s craziest or most shameful behaviours

The achievements have a direct impact on the traveler and his creatures.
The idea was to widen the field of possibilities and not only gain “experience” after a fight or after visiting a place.
We wished for it to be also achievable whenever the player would accomplish or choose something, as well as according to his game knowledge.

As each of you know, in Kaode, whenever you enter a place you’d never visited before, a pad brochure appears that describes your arrival. Here’s a first version.
(Haha. Sorry) 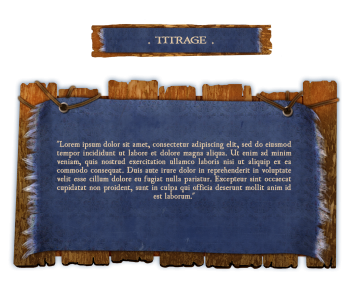 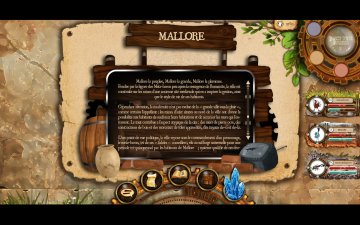 Kaode is strongly influenced by role playing games, books and ”Gamebooks”, which were very popular during the 80’s up to 2000. The storytelling through images and videos is fine, but nothing can overcome the words in order to encourage your brain to imagine consistent worlds. The texts in Kaode are here to inform the player, and allow us to suggest countless different atmospheres.
The narrator has several missions: to guide and tell the facts, to interact with the player and to point out emotions.

The choice of places, actions and dialogue options is conditioned by different factors (random, equipment choice, the time and all kind of others things we won’t reveal here). It is certain that two players following the exact same path will never live the same adventure, and won’t experience things the same way.
And this, ladies and gentlemen, is one of our overriding goal for Kaode.

Who doesn’t want to live their own and unique adventure?

In other words, seeing Kaode as a journey, we had to respect the improbable aspect of the timing during a specific trip. Think about it: what would have happened if you had come to Rome a few hours later? Or the next day? Would you have walked the same street? Eaten at the same place? Met the same people? 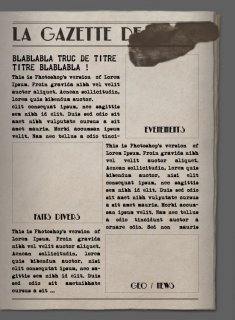 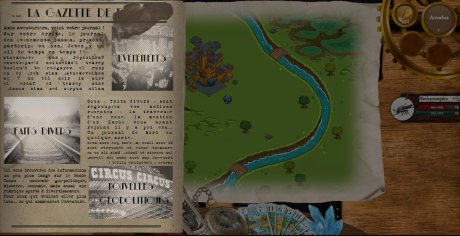 First version of the Gazette, the newspaper informing travelers about the state of the Known World. 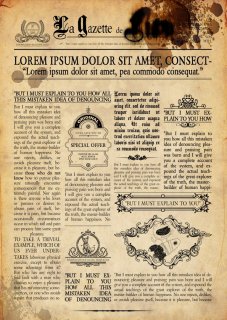 The Kaode universe being so rich, we had to find something for the player to be able to dig deeper.
The Known World is full of secrets. Mystery surround the past, the Oneiros project, but also today’s leading powers, how mankind came back to life, and many other trails and themes that we prefer for you to discover on your own.

We only hope you are curious. 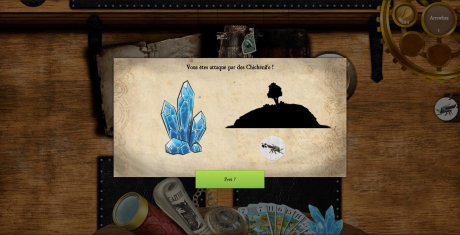 The pop-up letting you choose your creatures before a battle and reminding you which kind of environment it will take place in.

In Kaode, the different environments are essential for the adventure and for the fights. They influence your encounters, the creatures you’ll spot (Kaode or not) and all have their own surprises.

The fights have different levels of difficulty, but also a great number of different possible enemies: from 1 to 15!
Yup.
So beware, be always ready and prepare your different team compositions. We also remind you that unique power will activate when at least one other Kaode takes part in a fight. 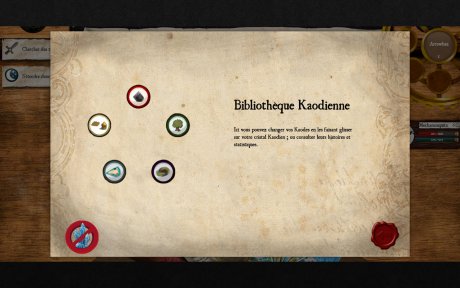 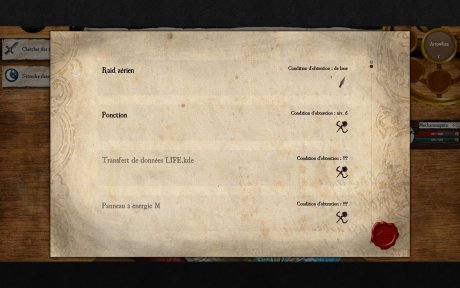 You can access it through the middle icon of the interface. The “Kaodian library”  is essential for you to manage your creatures and your teams.
It allows you to transfers your reservists Kaodes, check statistics, level crossing, informations on how to learn some attacks and your creature's origins… 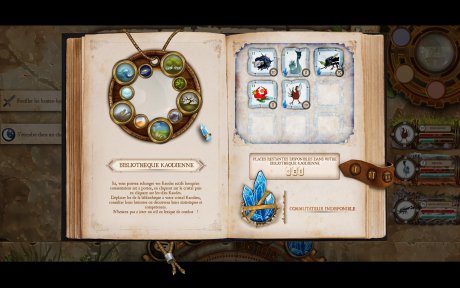 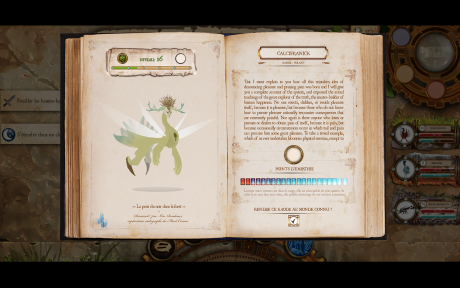 The library is very important as you can see; it required many improvements before reaching its final form.
The interface has therefore lived many modifications, and will probably continue to. 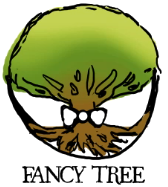 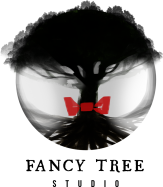 Support the team behind the project: invest in Kaode!